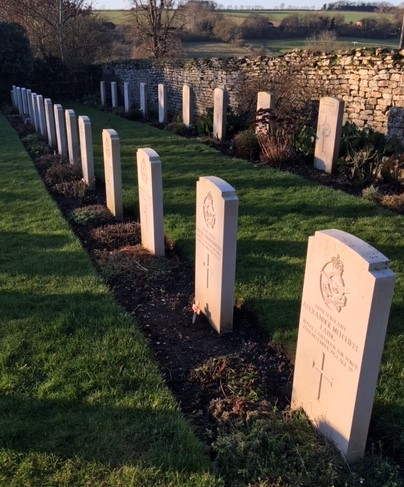 There are 11 RCAF Commonwealth Graves in the Churchyard.

On 15th November 1951 the station was handed over to the RCAF The station commander was Group Captain Hale RCAF. The Canadians stayed until 1 April 1955 when the Wing was deployed to Germany.

The best reference I have found about the post war Canadians is in a book called ‘Wings over Rutland’ by John Rennison. There were other casualties suffered by the RCAF squadrons at North Luffenham.

The graves are as follows:

14.12.54 Fg Off P V Robinson. Killed in a crash when his Sabre crashed near Holme Moss TV Station mast on the top of the Pennines near Huddesfiiled.

Missing airman – no grave in North Luffenham churchyard – not sure where he is commemorated 1.7.52 Fg Off Digger Conti – missing ten miles east of Flamborough Head. No trace ever found.

We will remember them. Lest we forget