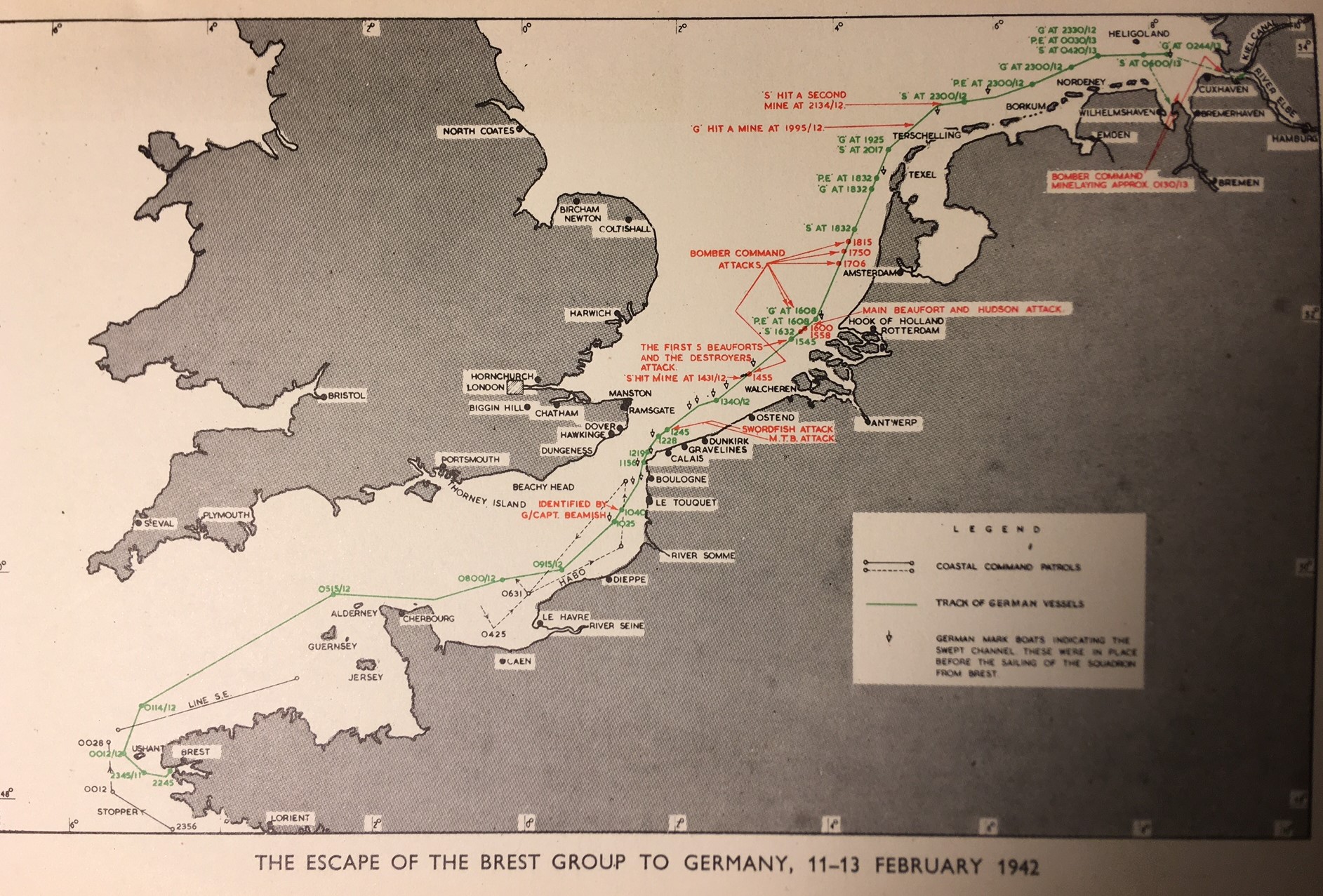 Map of the 'Channel Dash' Escape of the German fleet from Brest to Germany 11-13 Feb 42. and the Allied attacks Royal Air Force 1939 to 45 Volume 1 by Dennis Richards

A major event in the Battle of the Atlantic took place on the 12 February 1942. An account from the bomber command perspective is recorded that the Bomber Command War diaries for 1939 to 45.

the story is taken up as follows… The ‘Channel Dash’ took place where the German battle cruisers Scharnhorst and Gneisenau and the light cruiser Prinz Eugen set sail from Brest to move to Germany through the English Channel in a carefully prepared and well executed operation. Though the move had been anticipated the Germans gained surprise using bad weather. Despite best efforts of the Allies, the Germans suceeded and it was a national embarrasment that this had been achieved in ‘home waters’. The full story is recounted elsewhere. It was however, a significant tipping point as these ships did not sail again into the Atlantic and destroy shipping bringing supplies to the beleagured Great Britain.

Aircraft from North Luffenham were sent to the attack, although their departure was delayed until the afternoon as they had been on standby with armoured piercing bombs, which needed some height to use. Since the cloudbase was about 600 feet in the channel, the bomb load was switched to high explosive bombs, and this took time and I am sure a lot of groundcrew sweat powered by expletives.

My story links to this is when I served at RAF North Luffenham. When the station closed in 1998 I was present when a veteran called Jock Kennedy presented a painting to the last Station Commander, Group Capt Benstead. The painting had been hung in a corridor and showed Hampdens attacking battleships.

On 12 February 1942, 61 Squadron and 144 Squadron launched sorties (I do not know how many but this will be recorded in the operational record books) and that day 144 Squadron lost 2 aircraft. He said after having breakfast in the dining room with everyone, at the evening meal he had lost some friends and there were some empty seats at the table.

This stuck with me, having walked through that door many times. It is not easy to capture an event in time and space when the witnesses have gone or unless you were there. How can you capture these moments without witness testimony? Also also these events fade in time do people really care?

In the recent past I took the now ex chief executive of Rutland County Council to that spot and explained what had happened. Unfortunately, it seemed to me that she did not ‘get it’. It is highly likely that if MOD leave then the Officers Mess will be levelled and turned into houses.

The 2 aircraft lost were Hampdens AE141 and AT 175. With the loss of these two aircraft six men were killed including Wing Commander Simond (MID) the Officer Commanding 144 Squadron. Whilst AT 175 was lost without trace, with five crew members, AE141 was hit with flak managed to make an emergency landing at Norwich. Sgt Nightingale brought it home and died in hospital. Sgt Ivo Nightingale was from Kenya. He was awarded the distinguished flying medal (DFM) and is buried in Norwich cemetery. Further information on Sgt Nightingale is at Aircrew Remembered http://aircrewremembered.com/nightingale-ernest.html

I’m not sure how we can commemorate the sacrifice but perhaps by naming the main road within the Officers Mess complex Simond Road and Nightingale Road we might just forge a tenuous link to the past, the Channel Dash and commemorate their sacrifice.

On 12 February Bomber Command had dispatched 242 aircraft comprising 92 Wellingtons, 64 Hampdens, 37 Blenheims, 15 Manchesters, 13 Halifaxes, 11 Stirling’s and 10 Boston bombers. A large percentage of the aircraft crews never sighted the battleships due to the weather. 16 aircraft failed to return with the loss of 68 aircrew and five aircrew being captured becoming prisoners of war. You can read more about the Dash in wikepedia: https://en.wikipedia.org/wiki/Channel_Dash

It may be that the mine laying by 61 and 144 Sqaudron prior to the breakout may have contributed to the damage sustained by the battleships entering German waters. Later missions were also launched to bomb them in harbour. At this time of the war, once again the nation’s food supply was being sunk by German U Boats. Due to the mine and bomb damage and on going bomb damage the battelships stayed in port.