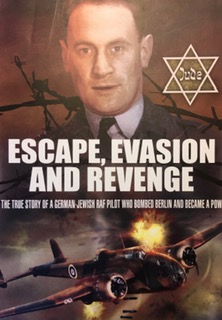 Squadron leader Peter “Steve Stevens” MC (Military Cross).
Royal Air Force 144 Squadron. This an example of the amazing stories of deeds done by people who were based at North Luffenham in WW2.

Peter Stevens (born George Franz Hein) was the only German Jew known to have flown bombers in the RAF in World War II. He was sent to safety in London from Germany by his widowed mother in early 1934 when he was aged 14 to avoid the rise of Nazi antisemitism. Hein learned english and graduated from Regent Street Polytechnic in 1936. After a year at LSE he began working, but immaturity and bad feelings towards his mother got in the way. Gambling away the remainder of his family fortune (which had been sent to England for his care and that of his two siblings) Hein got into trouble with the law. In July 1939 he was sentenced to 3 months for petty theft. Released from prison six weeks early on September 1 (which was the day the Germans invaded Poland). Hein then committed identity theft taking the name of a dead Polytechnic classmate, Peter Stevens.

Rather than reporting to the police station as an enemy alien (which would have meant internment for the duration) Hein as Peter Stevens reported to an enlistment station and joined the Royal Air Force for training as a fighter pilot. Selected instead for bombers, he was the object of a Metropolitan police manhunt during the 18 months he trained, and for five months he was flying combat operations as a Hampden pilot from North Luffenham.

Joining 144 Squadron at North Luffenham in April 1941, Stevens flew 22 combat operations before his aircraft was damaged by flak over Berlin on September 7, 1941. He ordered his crew to bail out and one rear gunner Sgt Ivor Roderick Fraser was killed when his parachute failed to open. Sgt Fraser has no known grave, but he is remembered on the Runnymede Memorial. The other air gunner, Sgt Thomas was captured and spent the rest of the war as a prisoner of war.

Stevens realised that the aircraft was marginally flyable and made it back as far as Amsterdam before he ran out of fuel, and force landed in a farmers field. He destroyed the secret bits of the aeroplane and set fire to the wreckage before setting out cross-country with his navigator, Sgt Alan Payne. They were captured by German troops within a day.

Stevens as a POW in his own country was without protection under the Geneva Convention (as he was still a German citizen). For three years and eight months he lived with the knowledge that the Nazis could take him out of the prison camp at any time and shoot him. Nonetheless, he went on to become one of the most ardent escapers of the war. Stevens made eight escape attempts, and got outside the wire three times, but was captured each time. Stevens was imprisoned in 4 diferent camps over his captivity. These were Lubeck (10C), Dosel Bie Wurberg (6B), Braunshweig (21B) and finallt Stalag Luft 3 (L3). In Stalag Luft 3 Sagan in Poland (where the great escape took place) he was head of contacts the term for ‘scrounging’ in the East Compound ‘X’ organisation from April 1943 to evacuation in late Jan 1945.

In October 1941 just a month after being captured, he and a Canadian pilot Mike Lewis jumped off a Nazi prison train in a hail of bullets, and they went home to see Stephen’s mother in Hanover. They were looking for civilian clothing, food and money, they discovered instead that Stephen’s mother had committed suicide six weeks before the outbreak of hostilities. This man spent 3 years and 7 months in captivity. He was one of 11,000 Bomber Command POWs – of which 1 in 20 failed died in captivity ( for a full account of Bomber Command POWs read Olvier Clutton-Brocks book – Footprints on the sands of time).

On May 17, 1946 Stevens was awarded the Military Cross (MC) for his escape activities, one of only 69 members of the Royal Air Force to receive the medal for bravery on the ground (see citation in the London Gazette below). Another of his escape attempts was characterised in a London newspaper on May 18, 1946 as the boldest escape attempt of the war. This man spent 3 years and 7 months in captivity before being liberated in April 1945.

Flight Lieutenant Peter STEVENS (88219), Royal Air Force Volunteer Reserve, No. 144 Squadron. Flight Lieutenant Stevens was the captain of a Hampden aircraft detailed to bomb Berlin on 7th September, 1941. After the mission had been completed the aircraft was hit by enemy anti-aircraft fire and had to be crash-landed subsequently, on the outskirts of Amsterdam. Flight Lieutenant Stevens set fire to the aircraft, destroyed all documents and then, in company with the navigator, commenced to walk towards Amsterdam. They met a farmer who took them to his house and gave them food, at the same time promising to put them in touch with an organisation. Both walked across country for an hour, and then hid in a hut on a football field. They were later found toy German Feldgendarmerie and taken to a Military prison, remaining therefor two days. They were then sent to the DulagLuft at Oberussel.

Flight Lieutenant Stevens was moved to Lubeck on the 20 th September, 1941. On 6th October, 1941, (he was entrained for Warbur and during the journey he made his escape, accompanied by another officer, by crawling through a ventilator and dropping to the ground while the train was in motion. Shots were fired and the train was stopped but he and his companion managed to reach a wood where they hid until the departure of the train. Shortly afterwards they jumped on a goods train and reached Hanover on 8th October. Here Flight Lieutenant Stevens made contact with some pre-war acquaintances who provided him with food, money and civilian clothes. He, with his companion, then entrained for Frankfurt. Here they were challenged by Railway Police and arrested being subsequently sent to Oflag Vi.B. at Warburg.

On 1st December, 1941, Flight Lieutenant Stevens made a further attempt to escape by disguising himself as a German Unter-Offizier. He led a party of 10 officers disguised as orderlies, and two officers disguised as guards with dummy rifles, and all marched through the gates of the camp. They had to return however, as the sentry was not satisfied that the gate pass was correct. Flight Lieutenant Stevens marched his party back to the compound and the sentry (the goon) was then quite unaware that the party was not genuine. A similar plan of escape was therefore, adopted a week later, but on this occasion the sentry was immediately suspicious and demanded of the party their pay-books. The party then had to disperse hurriedly but two of its members were arrested.

In September, 1942, Flight Lieutenant Stevens was moved to Oflag XXIB at Schubin. Here he made a fourth attempt to escape and managed to get away by means of a tunnel, carrying forged identity papers, wearing a civilian suit and carrying a converted great-coat. He took a train to Berlin, arriving there on the evening of 5th March, 1943. He bought a railway ticket to Cologne and, when on the journey to that town, he was asked for his identity card by a Gestapo official. The latter discovered that it was forged, and Stevens was then arrested and returned to the Oflag XXIB, receiving as a punishment 14 days in the cells (called the ‘cooler’).

Flight Lieutenant Stevens made a further attempt on 21st April, 1943. But it was unsuccessful and he served a sentence of 7 days in the cells. He was ultimately liberated by the Russian forces arrving at Stalag IIIA on the 21st April, 1945.

The amzing story does not end there.Stevens was naturalised as a British citizen in 1946 and then recruited to MI6 in 1947. He served five years in MI6 as an operative against the Soviets in Germany. He emigrated to Canada in 1952, married in 1953 and had two sons. Stevens died of a heart attack brought on by chemotherapy in 1979 in Toronto. If that is not a remarkable story – what is?

The biography of Peter Stevens called ‘Escape, Evasion and Revenge was published by Pen and Sword aviation in 2009. Further information at http://aircrewremembered.com/peter-stevens-mc.html