Except from Bommber Command Losses

In early 1945 the Luffwaffe had lost air battle over German soil. However, the application of air power can result in local impacts. On the night of 3/4 March (the 2000th night of the war) approximately 200 Junkers JU88 night fighters were sent to follow the bombers back to England. This offensive action took the British defences by surprise and 20 bombers were shot down, including 5 training aircraft. The 5 training aircraft had been on a diversion flight consisiting of 95 aircraft on a ‘diversionary’ sweep. This was a mock raid designed to deceive the German air defences and increase the mission success of the main force attack. Wikepedia catalogues the British and German losses (see link in references).

Two of the losses were 1651 Operational Conversion Unit’s (OCU) Lancasters flying from RAF Woolfox Lodge. So whilst still in training to become operational crews, they were shot down by a JU88 nightfighter.

Of the 2 crews of 7 men, there was only one survivor only Sgt Thompson. Lancaster ND387 was shot down at 0115 and crashed at Stretton and Lancaster JB699 was shot down at 0135 and crashed near Cottesmore. It is clear that the RAF were not expecting the attack as RAF aircraft were flying with navigation lights on, until warnings were received over the radio. Also airfield lights were on and only doused when warning was received.

This all happenend when perhaps the end of the war in Europe was in sight? The Allies had been on German soil since September 1944, the Battle of the Bulge was over, and the Allies were on the way to cross the Rhine. Germany surrendered on 7 May 1945.

The Woolfox casualties were buried at various cemeteries, 6 in Cambridge City Cemetery, others in Scotland and Bradford. It is not known where the 2 New Zealanders and the Australian from the crews are buried. The casualties are listed in Bomber Command Losses 1945 – see below and more detail is provided in Volume 8 – see lower down the page:

That night the Bomber Command effort was split between 3 missions: 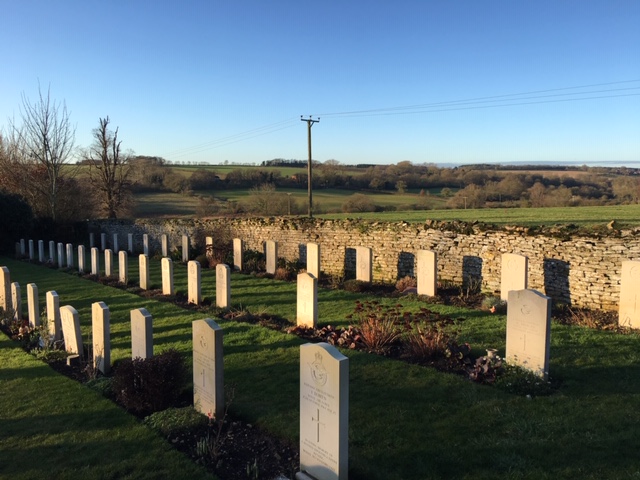 There are 40 Commonwealth Wargrave headstones in North Luffenham churchyard and the graves fall into 4 time periods:

World War 1 – 2 Army Privates – Adams and Steel – details not recorded in this blog.

This post provides details about the 18 World War 2 graves: 16 aircrew. 7 RAF (including an Irishman), 6 Canadian, 4 New Zealand, 1 Australian and 2 RAF groundcrew. This is minor fraction of men killed – see post the butchers bill this blog. Also men killed in crashes – were often sent home to be buried in their home parishes. Youngest man buried in North Luffenham was F/sgt Campbell at 19 years old and oldest was Sgt Douglas at 30 years old. The average being about 23 years old.

This is what I have found out about the men so far. Most of the information comes from the books Royal Air Force – Bomber Command Losses – 1941, 1942 and Volume 7 Operational Training Units (OTU) by W.R. Chorley. Also the Bomber Command War Diaries by Martin Middlebrook and Chris Everitt provide information about the wider effort on a particular day.

The raid that night consisted of 197 aircraft and 15 aircraft were lost – 8 Wellingtons, 2 Hampdens (including AD936), 2 Whitleys, 2 Stirlings and 1 Manchester.

20.9.41 Sgt Harold Douglas Weaver RCAF R62250 Air Observer. 144 Sqn RAF. One of four crew killed in a crash of Hampden K3030 on approach to land after an operation to Frankfurt at 22:05. Crashed into high tension cables alongside the Mortcott to Uppingham Road some 2 miles SE of the airfield. I don’t know where the rest of the crew is buried.

K3030 was one of 34 aircraft sent to Frankfurt but they were recalled because of worsening weather, some did bomb Frankfurt, no aircaft were lost but 3, including K3030 crashed in England. On the main raid to Berlin of 74 aircraft, none reached Berlin and 3 Wellingtons and 1 Whitley failed to return and 12 more aircraft crashed in the UK! Bad weather leading to many casualties, including Sgt Weaver.

The Hampden (AE311) had been on operations to Hamburg and crashed at 23:43. The crew were not recorded as being injured. There were 106 aircraft on the raid and 1 Welligton was lost.

25.1.42 Sgt Albert Barclay Wright RAF Wireless Operator/air gunner. 408 Sqn RCAF. One of four crew killed in a crash of Hampden AD782 on takeoff for Brest to bomb the German capital ships at 1737. Crashed after stalling at 1500 feet and eye witnesses said it dived straight into the ground near the Lyndon to Wing Road. Cause unknown. I don’t know where the rest of the crew is buried.

The Bomber Command War Diaries say that 61 aircraft were dispatched and no aircraft were lost. ( I have yet to cross check this with other records)

Stalled after takeoff and struck an ‘armadillo’ on the airfield and burnt. The pilot escaped with injuries. (wikepedia says an Armadillo was an extemporised armoured fighting vehicle produced in Britain during the invasion crisis of 1940-1941. Based on a number of standard lorry (truck) chassis, it comprised a wooden fighting compartment protected by a layer of gravel and a driver’s cab protected by mild steel plates. Armadillos were used by the RAF Regiment to protect aerodromes and by the Home Guard.[1] )

29.9.42 Sgt Ronald George Walters RCAF. 29 OTU training accident. Wellington DV834. Swung on take-off and crashed and burnt. It was thought that the pilot’s slender build was a contributory factor in the accident. Flt Sgt L. L Jones RCAF was killed and the other crew injured. Sgt Walters died the day after of his injuries. Flt Sgt L L Jones was born in Toronto Canada – however, after the accident he was ‘claimed’ by Cornish relatives and he is buried in St Just Cornwall.

Crash of Wellington N2761 From 11 OTU from RAF Westcott, Buckinghamshire on a training flight. Crashed at Fletcher Field near Ashley 5 miles WNW of Corby – 3 killed and 2 buried at North Luffeham. Luffenham must have been the closest RAF base and therefore, recovered the men.

Killed in Wellinton BK268 of 427 Sqn from RAF Croft. Crashed on Ops to Koln, Crashed while returning to Croft with one engine on fire. Crashed near Woolfox Lodge – 5 killed 1 injured. That night 427 aircraft were dispatched and 4 Wellingtons, 3 Lancasters, 2 Halifaxes and 1 Stirling were lost.

Killed in 29 OTU Wellington BK390 on a training flight – took off at 0159 from North Luffenham and crashed into houses in North Coates, Cambridgeshire, 4 killed and 1 injured. Sgt Mullet was one of the Irish Volunteer Legion. One of up to 200,000 Irish Volunteers serving in armed forces in World War 2.

2.5.42 Flt Sgt J R Young RCAF – Pilot and Sgt H Morrison RNZAF Observer. Killed in the crash of Belnheim L9206 from 13 OTU. Took off from RAF Bicester on a navigation exercise and crashed at 11:35, 3 miles east of Billesdon – 8 miles SSE of Leicester. Dived into ground and exploded killing all 3 crew.

WE WILL REMEMBER THEM.