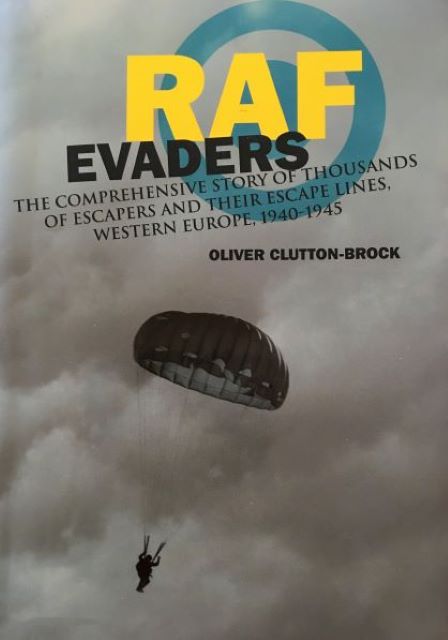 Book full of amazing stories of evaders and the resistance

From all the aircraft lost from RAF North Luffenham I can only find one airman who managed to evade capture and escape back to Great Britain. The airman was Sgt Albert Wright, a Canadian serving in the Royal Air Force. He was shot down in an Avro Manchester on 31 December 1942 whilst attacking Brest. He finally made it back to Greenock in Scotland on 5 October 1942. 9 months ot make it back to the UK and a journey across Europe.

There is a comprehensive record of the thousands of escapers and their escape lines in Western Europe in 1940 to 1945. This is in a book called ‘RAF Evaders’ by Oliver Clutton-Brock.

While the story of Albert Wright’s escape is in the book, it is one of those books where you can open any page and find incredible stories on every page, I am not exaggerating!. The book records the stories of the evaders but also illuminate stories of the people that ran the escape lines to return Allied airmen to the fight. Their story is also incedible.

This is what the book records about Albert Wright:

Sgt Wright was the mid upper gunner of an Avro Manchester of 61 Squadron, which lost three of its aircraft and 23 airmen on attack on the German battle cruisers, Scharnhorst and Gneisenau at Brest, on the nights of 31 January/1st of February 1942.

14 of the 23 airmen were killed, eight taken prisoner, and only Wright evaded capture. Hit by heavy flak defending the port, Wright’s Manchester was too low for the crew to bail out. Pilot Officer J R B Parsons had no choice but to land his aircraft as best he could.

Wright survived the crash, and so too did the rear gunner, Sgt Griffiths. Griffiths had a broken leg, and though Wright helped him out of the blazing Manchester, Griffiths was taken prisoner. Wright was soon found and sheltered by local Bretons.

After several days he was told about an organisation headed by a French Canadian called O’Leary, who would soon have him on his way to England by submarine. Unfortunately, the Germans arrested those that were about to help him and he found himself trapped in Brittany. Continually moved from house to house.

In mid-March he went to the Château Trefrey, home of the Compte and Contesse de Poulpiquet, where he stayed until May, when the Contesse herself helped him get to Quimper.

Another guide, a Jewish psychiatrist, took him as far as the demarcation line (the line between Nazi and Vichy control), where a young girl saw him across. She left him at a prearranged point where he walked on alone to a car. The driver of which, waiting to take him to LaHayediscards was Dr Vourc’h, one of those who would help them earlier in Brittany. Dr Vourc’h had to make good his escape to Vichy France, when he learnt that he was a wanted man by the Gestapo. He now took Wright to Montlucon. But on failing to make contact with the next human link in the chain, he escorted him to the American consulate in Lyon.

It was still possible at that time, June 1942, for telegraphs to be sent between Vichy France and England and while he was in Lyon Wright received the wonderful news that his wife had given birth to a son. The US vice consul, George Whittingdale, saw that Wright was well looked after. Within a few days someone from the PAO line took him and Dr Vourc’hht to Marseille. Wright was introduced to Pat O’Leary himself. Taken to an apartment, Wright actually arrived wearing a dinner jacket.

In reading this account I found that O’Leary had a very interesting past, but in the end he was betrayed by a man called ‘le Neveu’. After being arrested in Toulouse on 2 March 1943 O’Leary was sent to concentration camps and he was liberated in Dachau on 29 April 1945, later he was awarded the George Cross. His betrayer was a Gestapo agent and he himself was liquidated by the French ‘maquisards’ on the liberation of France in 1944

Back to Albert Wright’s story: Wright was moved to another safe house where other airmen had been placed. On 11 May a group of airmen and four Belgians who wished to join the armed forces, were all moved down the line, Banyons on 9 June. Setting off with 2 Spanish guides, it took the 12 men two days on foot to reach Spain, on 11 June the guides taking them to within 20 km of Gerona.

The escapers now split up into pairs but Wright was caught by Spanish police on a train to Barcelona. Wright was thrown into a police cell at Barcelona, before being transferred to a Spanish concentration camp, where all his hair was shaved off. He was released from the concentration camp on 23 September and was one of those to return to Scotland on HMS Malaya a week later.

What happened to Sgt Wright from the rest of the war and after the war is not recorded in the book.